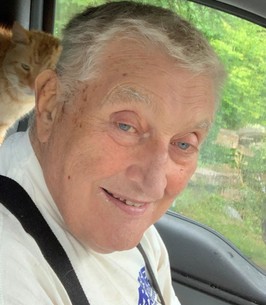 Larry Richard “Butch” Glotfelty, 75, of Friendsville, MD, entered into to Heaven to meet Jesus and received his new, glorious, pain free body with his daughter at his side, on January 20, 2022, at Garrett Regional Medical Center, Oakland, MD.

Born May 22, 1946, in McHenry, MD, he was the son of the late Richard M. and Verna E. (Opel) Glotfelty. He was also preceded in death by his in-laws, William W. and Sarah M. (Clovis) Smith; brother-in-law, Glenn Krause; two nephews Andrew Coyle and Terry Royce; and numerous other extended family.

Butch is survived by his wife of nearly 52 years, Susan R. (Smith) Glotfelty, whom he met while working at Will O’ the Wisp and married June 27, 1970. He is also survived by his daughter, Brenda E. (Glotfelty) Skipper and husband, Denton A. and two very special grandchildren, Derek A. Cosner and Ava E. Cosner, who helped take care of him in a devoted and loving way until the day he died. Also surviving are his sister, Joyce E. (Glotfelty) Krause; two sisters-in-law, Sharon (Tim) Brechon and Stephanie (Juan) Zambrano); three nephews, Michael (Joyce) Krause, David Krause and Edward (Jennifer) Coyle; niece, Diana (Krause) Royce; along with a special uncle, Robert Opel and many great nieces, nephews and cousins all over the USA.

Butch was a 1964 graduate of Northern Garrett High School, where he was in the FFA. He won the Reserve Grand Champion for baby beef in 1962 and 1963 at the Garrett County Fair. Butch worked for the H.M.H. Corporation/Wisp Resort for 45 years until 2012 when complications from a heart surgery forced him to retire. In life he enjoyed his personal relationship with his Savior the Lord Jesus Christ, followed by the fierce love for his family. He enjoyed hunting, fishing (when they were biting), reading his Bible, gardening and raising animals. For 35 years he was the pastor of Grace Independent Bible Church in Grantsville/Accident and attended Harvest Baptist Church.

Butch/Dad/Granddad will be greatly missed by his family. His family wishes to thank the neighbors and friends who helped them.