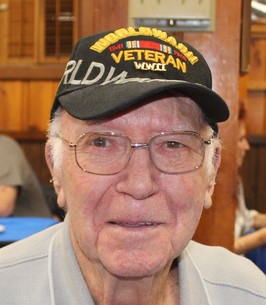 Joseph Matthiesen passed away in his cottage home at Goodwill Retirement Village on Friday, October 15th. He had lived a “beautiful” and “lovely” life for 96 years, and though he was striving to live an even fuller life beyond those years, it was not meant to be. Joe was a warm and gentle soul and those he leaves behind will dearly miss him. He had many friends, as all who met him ended up loving him. At his 90th birthday party bash at the Elks lodge, he offered up these words of wisdom: “You get out of it what you put into it!”. How very true and wise his words were. He was the last surviving member of his immediate family.

Joe’s life was full of service, beginning as a soldier on anti-aircraft carriers during World War II in Hawaii. He was extremely proud of his service and having done so led to service being an integral part of his character.

When he and his two brothers returned from WWII, they started Vet Dry Cleaners in Arbutus, Maryland. Their business thrived and supported the three families for decades, keeping them close all the while. They shared summer homes together on a combined property on Thomas Point on the eastern shore of the Chesapeake Bay, and their children grew up together loving the Bay and the water and became as close as cousins could possibly be. While living in Arbutus, Joe continued his service as a dedicated member of the Arbutus Chapter of the Lions Club and took pride in having had the opportunity to act as its President.

The brothers retired and sold the business in 1986, and it was around that time that Joe and his wife, Kate, moved to Garrett County. Kate loved the snow, Joe loved to hunt, and they both had always wanted a cabin in the woods, so their daughters convinced them that Garrett County was where they wanted to be. They loved living here. He and his wife quickly made friends by becoming dancers in the Mountaintop Promenaders. They developed such wonderful friendships and loved the costumes, the dancing and traveling the region with the group.

Joe’s life of service continued after moving to Garrett County. He was a life-long member of B.P.O.E 2481 and served as its Secretary for 17 years. After leaving that post, he served as a member on various committees at the Elks, as Trustee, and volunteered at Sunday afternoon bingo for years. He was an active member of the Proctor-Kildow American Legion Post 71 in Oakland, until he transferred his membership to Grantsville Post 214, American Legion when he moved to Grantsville. The membership loved and welcomed him as a World War II veteran and showed him the honor he truly deserved.

In pre-COVID days, Joe enjoyed socializing with his friends at the Lodge or the Legion, bingo at Deer Park VFD on Saturday nights, cash and gun bashes wherever they were, and shuffleboard at the Elks Lodge on Tuesday nights. He absolutely loved the Baltimore Ravens, which was tough in a Steelers town, but he did take pleasure in agitating those Steelers fans when the Ravens beat them! He was looking forward to watching the Ravens win the Superbowl this year on a new huge screen tv he had ordered, which was supposed to be installed next week. Hopefully he’ll still have a front-row seat for that.

Joe was predeceased by his wife, Katherine. He is survived by his daughters Lynne (Glenn) Crehan of Everett, PA, and Nancy (Jim) Grimm of Grantsville MD, granddaughter Anna Matthiesen Schauss (Philip) and great-grandson Oscar of Ridgewood, NY and his grandson, Joe, of Baltimore MD. He will be missed by many nieces and nephews, but especially by Tommy Matthiesen (Patty) of Oakland, MD and Janet O’Conner (Eddie) of Arbutus MD.

He was cremated at his request and his daughters will hold a celebration of his life at time when it is safer for large groups to gather. If desired, condolences may be expressed by making contributions to B.P.O.E. 2481, 100 Elk Street, Oakland MD 21550 or Grantsville Post 214, American Legion, 108 Miller Street, Grantsville MD 21536.